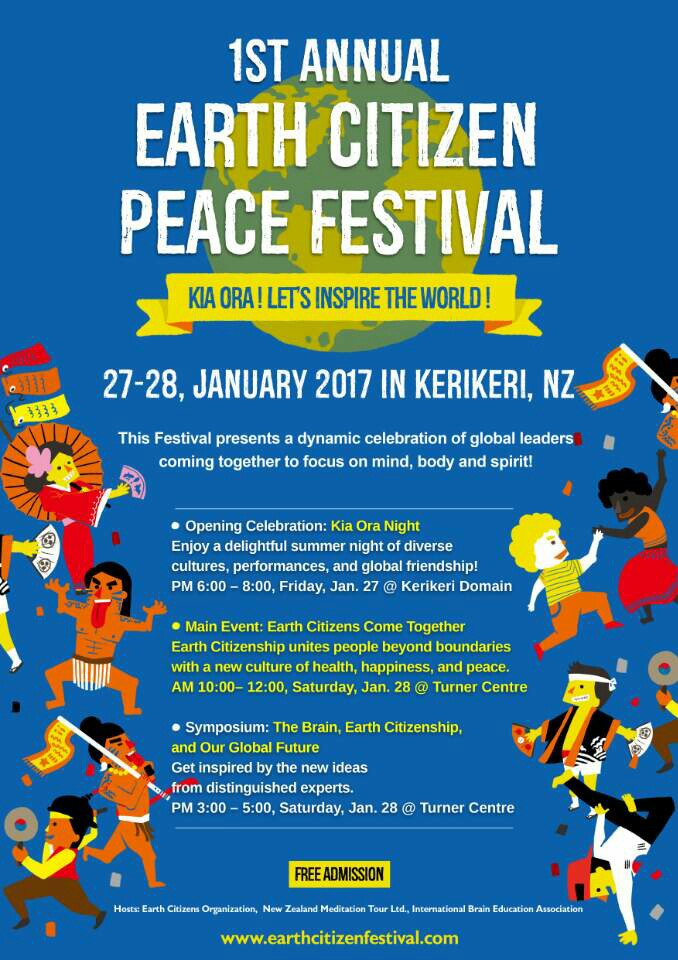 It strives forward, the Earth Citizen Movement that Ilchi Lee created, gathering more and more people who understand that they are not just a citizen of one particular country and not just a member of any one group—they are citizens of the earth. They love the earth and want to take care of it.

At the 1st Annual Earth Citizen Peace Festival, which will be held in Kerikeri, New Zealand on January 27-28, 2017, the meaning of being an Earth Citizen will be celebrated. Among the festivities, however, is a symposium that will expand our ideas of Earth Citizenship. It will explore the intersection between being healthy naturally, the importance of the gut to overall well-being, the power of the brain, and solutions to the problems facing humanity and the planet today.

The small town of Kerikeri on the North Island of New Zealand was also chosen by Ilchi Lee as the site of a new Earth Village, where Earth Citizens from around the world can learn and practice an Earth Citizen lifestyle—one that is in harmony with the earth and everything that calls it home. The pristine and amazing natural beauty and Maori cultural heritage that New Zealand is known for come together in Kerikeri; it is a place where, Ilchi Lee says, nature’s energy is strong and you can feel your own true nature easily. The Earth Citizen Festival will introduce Kerikeri to the world as an Earth Citizen hub.

With the festival title, “Kia Ora: Let’s Inspire the World,” the organizers hope the festival will inspire the people of the world to keep the earth and its people healthy and well (kia ora is a Maori greeting that literally means “be healthy/well”). This wish has driven Ilchi Lee and the Earth Citizen Movement to where it is today.

To learn more about the Earth Citizen Peace Festival, visit its website at EarthCitizenFestival.com.