Ljubljana, the capital of Slovenia, recently won the 2016 European Green Capital Award, which is given to cities with outstanding sustainability achievements. 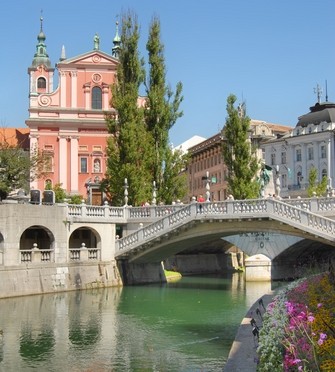 Ljubljana, Slovenia, recently won the 2016 European Green Capital Award, given annually by the European Commission to cities that set a high-bar example of sustainable urban development. While many may never have heard of Ljubljana, we have a lot to learn from them.

Ljubljana: Leader of Sustainability
The city is the capital of Slovenia, and the political, administrative, cultural and economic center of the region. It's home to more than 280,000 inhabitants. In the last decade, it has evolved into a thriving urban center with an exemplary dedication to sustainability and minimal environmental impact.

The streets of Ljubljana used to be dominated by gas-guzzling cars and trucks. Now, one can see residents taking advantage of public transportation as well as pedestrian and cycling networks. The European Commission reported that the most significant change has been the modification of the traffic regime on the main traffic artery of Slovenska Street.

The Mobility Plan, adopted in 2012, aims to equalize use of the city's public transportation with cars and non-motorized modes by 2020. It has already helped increase public travel to nearly 28 percent.

Addressing Climate Change
Ljubljana has also emerged as a leader in confronting climate change. The city ambitiously proposed plans to reduce emissions by up to 80 percent by 2050, a goal that reflects the city's commitment to transparency concerning environmental data. As testament, the World Summit Award, a United Nations initiative, chose Ljubljana's Thermal Power Plant as one of the world's five best practices in the area of environmental protection and health for its communication with residents about its emissions and effects on health and the environment.

Rapid Urbanization
For the first time ever, the majority of the world's population lives in cities, according to the World Health Organization. Even 100 years ago, only 2 out every 10 people lived in an urban area, yet by 2050, more than 7 out of 10 people are expected to live in a city.

Ljubljana's steps toward energy efficiency align with the messages of Ilchi Lee, an advocate of a peaceful, sustainable world. Lee expressed some of his concerns about climate in "The Call of Sedona: Journey of the Heart."

"The clock of civilization is moving much faster than all of us expected, and the earth's environment is losing its balance at a shocking rate," Lee wrote.

With such a rapid urbanization process, it's important for individuals, communities, states and nations to set goals regarding energy efficiency and minimizing the carbon footprint.

Following Ljubljana's Example
In recent years, there have been hundreds of projects that have improved quality of life and environment. For example, about three-quarters of the city consists of green space. Between 2008 and 2012, the city created almost 100 acres of new parks – that adds up to a whopping 6,027 square feet of green space per inhabitant.

Two million trips have been made on the public bike program since 2011. Furthermore 3,500 waste containers have been replaced by 51 underground waste collectors.

Perhaps we can find new ideas and inspiration to help minimize our carbon footprint, for there is no doubt the citizens of Ljubljana are setting a precedent for the rest of the world to follow.