The National Climate Assessment released by the White House outlines the here-and-now impacts of climate change. 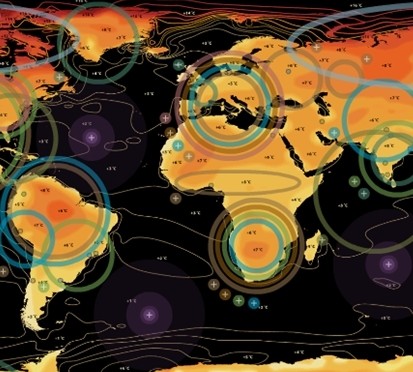 Climate change is no longer a faraway concern lingering on the horizon. It is present here and now, and millions of Americans and people all over the world are feeling its effects, announced a new report released by the White House this month.

The National Climate Assessment report, the result of a three-year analysis by a team of more than 300 experts overseen 60 members of the Federal Advisory Committee, outlines the impact of climate change on the U.S.

Corn producers in Iowa, water managers in the arid Southwest, maple syrup producers in Vermont and city dwellers from Phoenix to New York are experiencing weather shifts. Summers are long and hotter and winters are typically shorter and warmer. Rain comes in heavier downpours.

"This is not some distant problem of the future," president Barack Obama told NBC.

In the last few decades, climate science has shown with increased certainty that we are now experiencing impacts associated with human-induced climate change. Carbon emissions from factories, power plants and cars all contribute to it. As the carbon footprint becomes larger, the outcome becomes worse.

Action Plan
Last year, Obama launched his Climate Action Plan that vouched that this report would be used to manage the risks of climate change. Now, the report urges citizens and the U.S. government to respond to the twin challenges of reforming policies to ameliorate further climate change and preparing for the consequences of climate changes that can no longer be avoided.

Take advantage of recycled materials and bear in mind energy efficiency – such as turning off lights when one is not a room, carpooling and not wasting water in long showers and baths – are steps to lessen the damage we have done.

The Assessment said that responses can be split into two broad categories. The first is "mitigation, which would reduce CO2 emissions and increasing the removal of carbon dioxide from the atmosphere. The second is "adaption," to enhance the world's ability to cope with and steer clear of harmful effects.

Yes, It's Real
According to CNN, recent polling indicates that most Americans believe human activities cause climate change. However, it also shows that the issue is less important to the public than the economy and other topics.

The U.S. average temperature has jumped by 1.3 degrees Fahrenheit to 1.9 degrees since 1895, and the majority of this increase has occurred since 1970. 2012 was the hottest year on record in the continental U.S.

This is not just the U.S.'s problem or one for China, Brazil or any other country for that matter; it is a global issue. Ilchi Lee, a New York Times best-selling author and dedicated advocate of peaceful, sustainable world, shares that climate change is something that all of the citizens of the world must confront together. Party lines should no longer be an obstacle. There is no red or blue, only green. Lee also started The Earth Citizen Organization, a non-profit that lends a hand to environmental improvement.

If you think it doesn't affect you, think again. Coastal cities have witnessed their streets flood more regularly during high tides, and inland cities by large rivers are also experiencing more flooding. As a result, U.S. insurance rates are rising in some vulnerable locations, and insurance has been altogether removed in others.

The summer sea ice in Alaska that used to protect the coasts has receded. The report forecasts that sea levels will rise at least a foot by the end of the century and even as much as four feet, depending on how much of the Greenland and Antarctic ice shelf melts. The consequence could be catastrophic for millions living along the ocean as it could submerge tropical islands and creep up on coastal regions.