Ilchi Lee was honored by the City of Beverly Hills when Mayor Jimmy Delshad issued a proclamation declaring September 8, 2007, to be Ilchi Lee Day, commending and congratulating him on his accomplishments as a Brain Education teacher and researcher, and on his dedication to world peacemaking.

The official proclamation acknowledged Ilchi Lee as the founder of Dahn Yoga and Health Centers, one of which is in Beverly Hills, teaching energy-based, body-brain fitness; as the founder and president of institutions in South Korea and the United States that promote the role of the brain in creating lasting peace; and in teaching that if humanity focus on the brain as the final determinant of human consciousness and behavior, people worldwide will unite in peace during this century.

Previously, Mayor Delshad came to the Dahn Yoga Center in Beverly Hills, on the occasion of the celebration of its first anniversary of operations in that city.

Ilchi Lee was recognized by the City and County of San Francisco when Mayor Gavin Newsom proclaimed September 7, 2007, as Ilchi Lee Day, in praise of his distinguished contributions in Brain Education to San Francisco and the world.

The official proclamation made these points regarding Ilchi Lee and his accomplishments: Leading brain philosopher and educator dedicated to promoting awareness of the brain and its potential to improve the human condition; founder and chairman of the International Brain Education Association and developer of the Brain Education System Training (BEST), taught in five San Francisco Bay Area centers; BEST is reaching educators, students, parents, and other citizens in San Francisco and the Bay Area to promote their health and overall wellbeing; author of 29 books in Korean, with 12 books translated into English and nine into other languages; and continuation of sharing his philosophy and training techniques in the fields of education, healthcare, business and government, impacting thousands of people worldwide.

Ilchi Lee was honored by the City of Las Vegas when Mayor Oscar B. Goodman declared September 6, 2007, as Ilchi Lee Day, recognizing his valuable contributions to Dahn Yoga and Brain Education.

By virtue of the authority given to the Mayor by the laws of the State of Nevada and by the Charter of the City of Las Vegas, he asked “all citizens to acknowledge and welcome Ilchi Lee, founder of Dahn Yoga and creator of Brain Education, as he visits our great city.”

The executive order “encouraged all citizens to celebrate this distinguished friend of our community.”

In the Executive Order, the Mayor made these declarations regarding Ilchi Lee and his accomplishments: Focusing his efforts on the brain because through it human being experience and affect all reality; founder and president of the University of Brain Education; founder and president of the Korea Institute of Brain Science, and founder and chairman of the International Brain Education Association; Brain Philosopher and Educator continuing to contribute to the health and wellness of Albuquerque; and devoted his life to the study of brain awareness and its potential to improve the human condition.

The City of Houston honored Ilchi Lee by Mayor Bill White officially proclaiming August 28, 2007 as Ilchi Lee Day, at a ceremony at the City Council of City Hall.

Mayor White presented Ilchi Lee with the official proclamation document; also attending were Peter Brown, City Council Member, and Terry Ferro, representative of the Houston Region Dahn Centers. The proclamation states that Ilchi Lee is being recognized because of his major contributions to the health and wellbeing of Houston and the world, and wished continued success for many more years.

A partial list of his contributions were given in the proclamation document: Ilchi Lee developed Brain Education System Training, the core curriculum of the Dahn Yoga Centers, which he founded; as a leading Brain Philosopher and Educator, he has improved the health of citizens of Housto, as evidenced by testimonials of its members; Dahn Yoga Center’s conduct of Walking for Health at the University of Houston, May 2007; his continued devotion to the study of brain awareness and its potential to improve the human condition.

The August 28 ceremonty that preceded the proclamation of Ilchi Lee Day was the Mayor’s recognition of the opening of the Korean War Veteran Museum in Houston.

August 20, 2007 was officially designated by the City of Gaithersburg, Maryland, as Ilchi Lee Day, in a proclamation issued by Mayor Sidney Katz and presented in a ceremony at the City Hall.

The purpose of the proclamation was to honor the accomplishments of Ilchi Lee in the field of Brain Education and its contribution to the general health and physical, mental and spiritual wellbeing of the people who practice it. 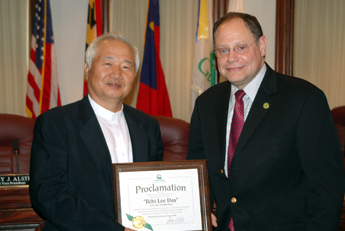 As stated in the proclamation document, Ilchi Lee was recognized for these reasons (partial list): his Brain Education System Training is the core curriculum of the Dahn Yoga Centers, which he founded; as a leading Brain Philosopher and Educator, he continues to contribute to the health and wellness of Gaithersburg and the District of Columbia community, as evidenced by member testimonials; Dahn Yoga Center members are aligned with the Mayor’s Office to make Gaithersburg a more fit city; members report improved health with practicing Brain Education; members participated in the Montgomery County Women’s Fair, presenting a well-received lecture on Human Technology for Holistic Health; Dahn Yoga Centers provided warm-up exercises for the participants of the MS Walk; members are offering free classes at their companies, churches, hospitals and community; and Ilchi Lee has devoted his life to the study of brain awareness and its potential to improve the human condition.

A partial list of his contributions were enumerated in the proclamation document: He developed Brain Education System Training, the core curriculum of the Dahn Yoga Centers, which he founded; as a leading Brain Philosopher and Educator, he has improved the health of citizens of Alexandria and Washington, DC, as evidenced by testimonials and 30% of members reporting health improvement results; Dahn Yoga Center members are aligned with the Mayor’s Office to make Alexandria a more fit city; more than 1,000 local members are sharing wellness techniques with their families, businesses and communities; Dahn Yoga Center’s Walking for Health in Alexandria was enthusiastically received; and CEOs have described success resulting from Brain Education and related workshops.

Ilchi Lee was honored by a proclamation issued by Mayor John W. Hickenlooper of the City and County of Denver, Colorado, designating July 25, 2007 as Ilchi Lee Day. The official proclamation was issued in order to recognize the contributions of Ilchi Lee to Denver and the world.

The proclamation states that Ilchi Lee is a leading Philosopher and Brain Educator, with a life dedicated to promoting awareness of the brain and its potential to improve the human condition; he is the Founder and President of International Brain Education Association and has developed Brain Education System Training, which is taught in Denver and affects many citizens of Colorado; he has authored 29 books on health, personal growth, world peace, and brain education; and he continues to share his brain philosophy and educational techniques in the fields of education, healthcare, business and government, thus impacting positively on many thousands of people throughout the world.